skip to main | skip to sidebar

Welcome to my world of pipes. On these pages you will see some of what goes on in my workshop. A bit of work-in-progress, mess-ups (they do happen!) and also some other pipe-related posts.
I love talking about and discussing pipes, so feel free to contact me at charl.chillfactor@gmail.com.
Should you wish to have a look at my pipes, please drop in at my website (http://goussardpipes.com/).

War of the Briar

This past week I had a stummel in the lathe with everything drilled and the shank shaped, just the bowl still to be turned. I was a bit hasty with the gouge and this was the result!
The smaller piece hit me in the stomach, with the larger flying past my left ear.
Who said pipemaking is for sissies? 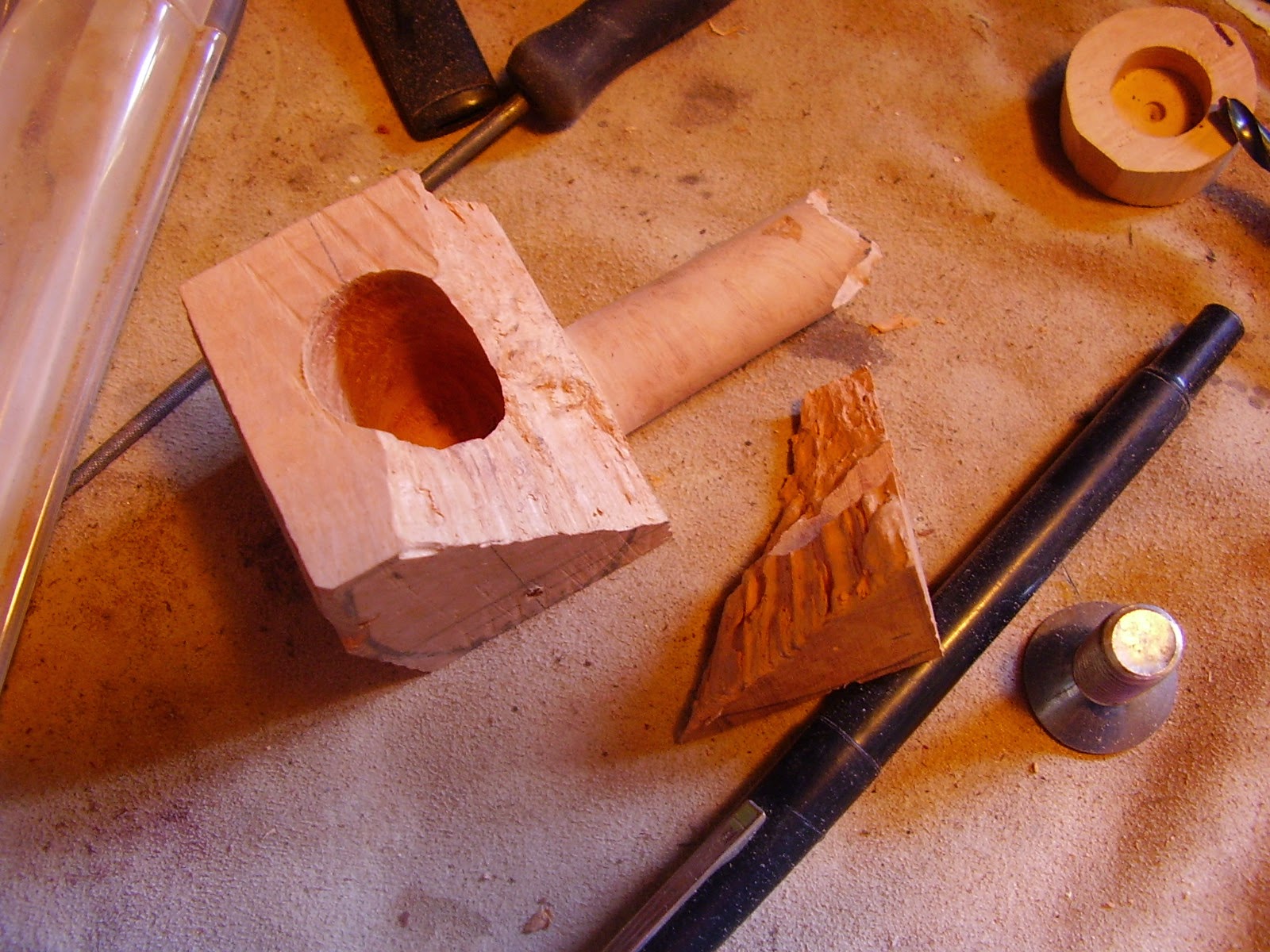 I was busy with a pipe that I was going to fit an endcap to, this afternoon, when this happened... 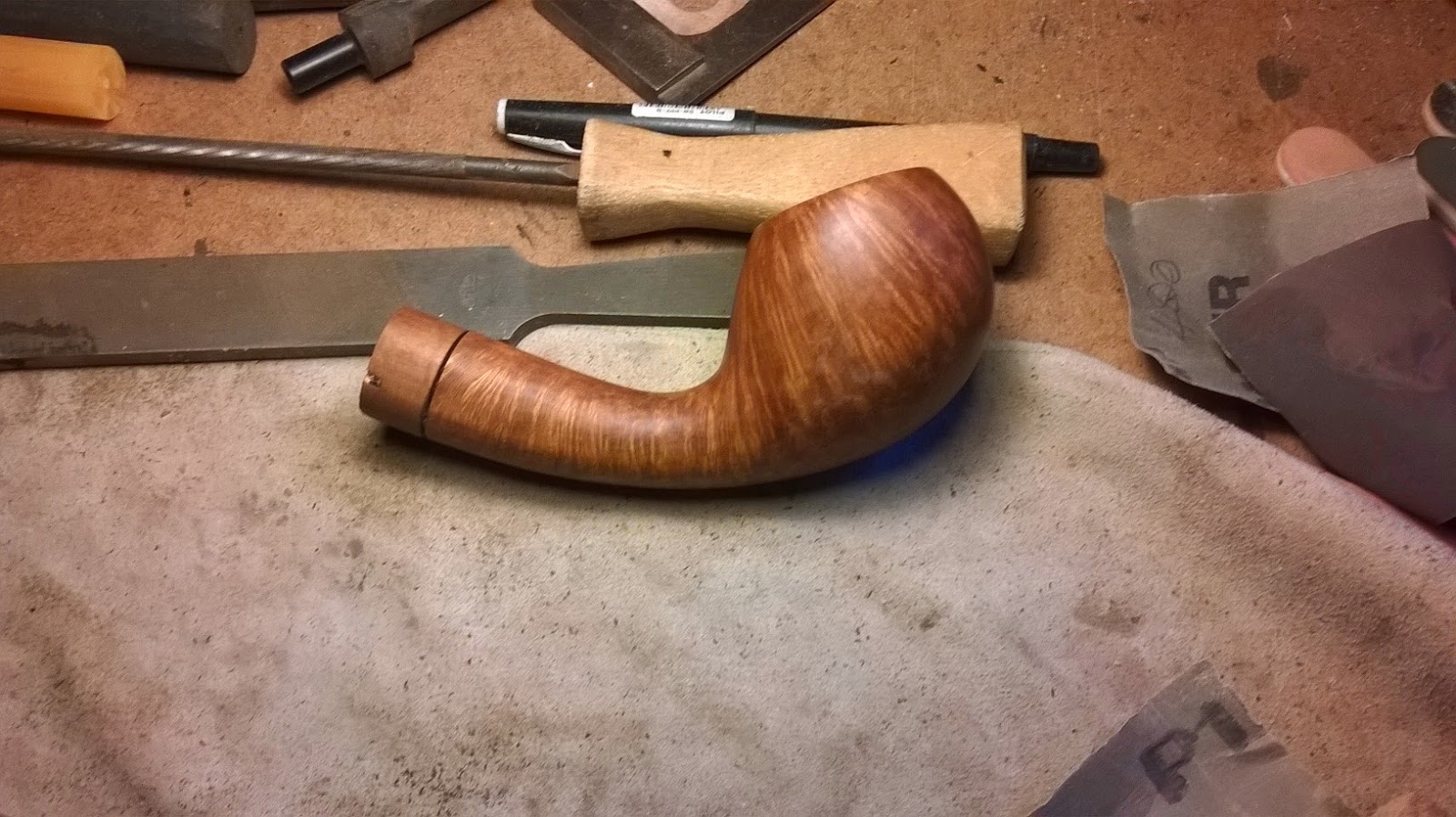 Normally I turn a little tenon on the shank when I'm planning on using an endcap, then fit a scrap piece of briar over with a spot of CA glue to keep it in place while sanding. This is done so that I end up with smooth lines towards the end of the shank, instead of rounding it over, which is bound to happen when doing it without. 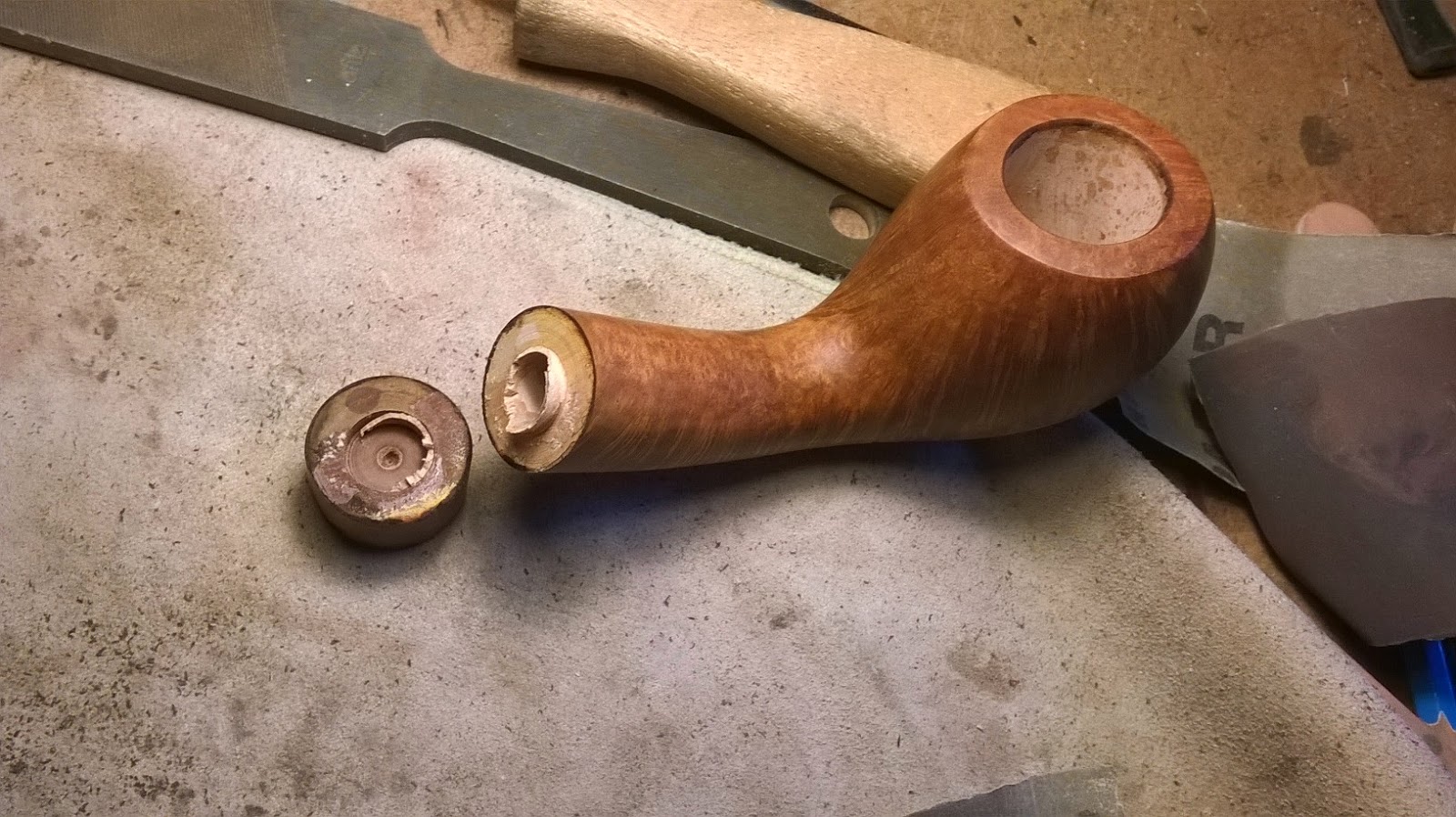 Under normal circumstances (today I use the term lightly), I put the scrap end into a vice and with a gentle but firm twist, break the unwanted piece off. If you look closely, you'll see part of the briar tenon on the left in the scrap piece and the broken bit on the shank end of the stummel. A bit of the CA glue must have gotten where it was not supposed to go, onto the tenon and not just the face.
Posted by charl goussard at 5:51 PM No comments:

I've just recently finished the Autour de la Pipe Pipe of the Year for 2014 and thought I'd share some very random photos. Random, because most of the time I forgot! 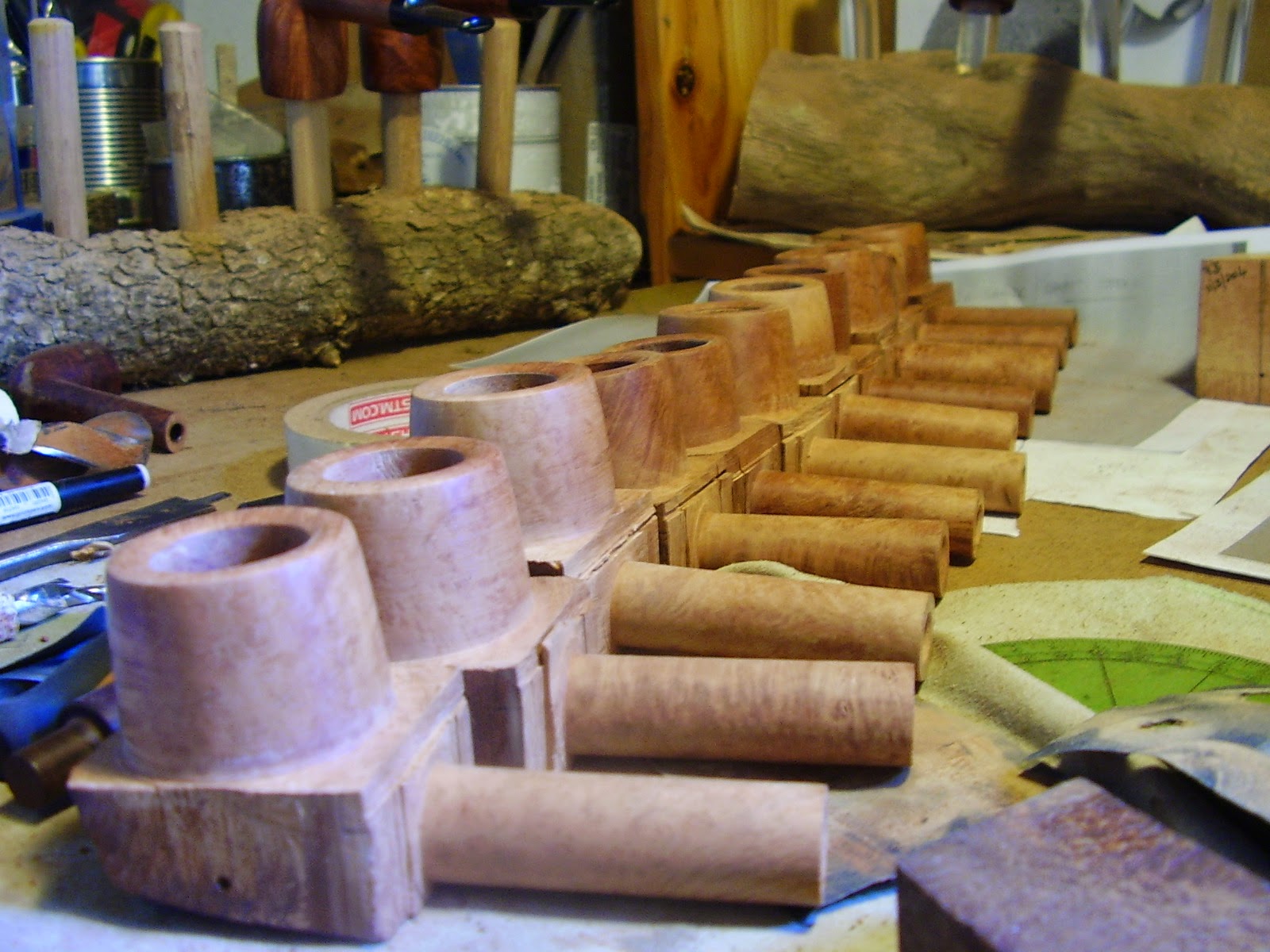 This photo above, is where I finished the lathe work on the stummels. All stummels have been drilled with mortise, airway and bowl. The top of the bowl and most of the shank has also been turned and sanded as much as possible. After this, I went to the sanding disc. 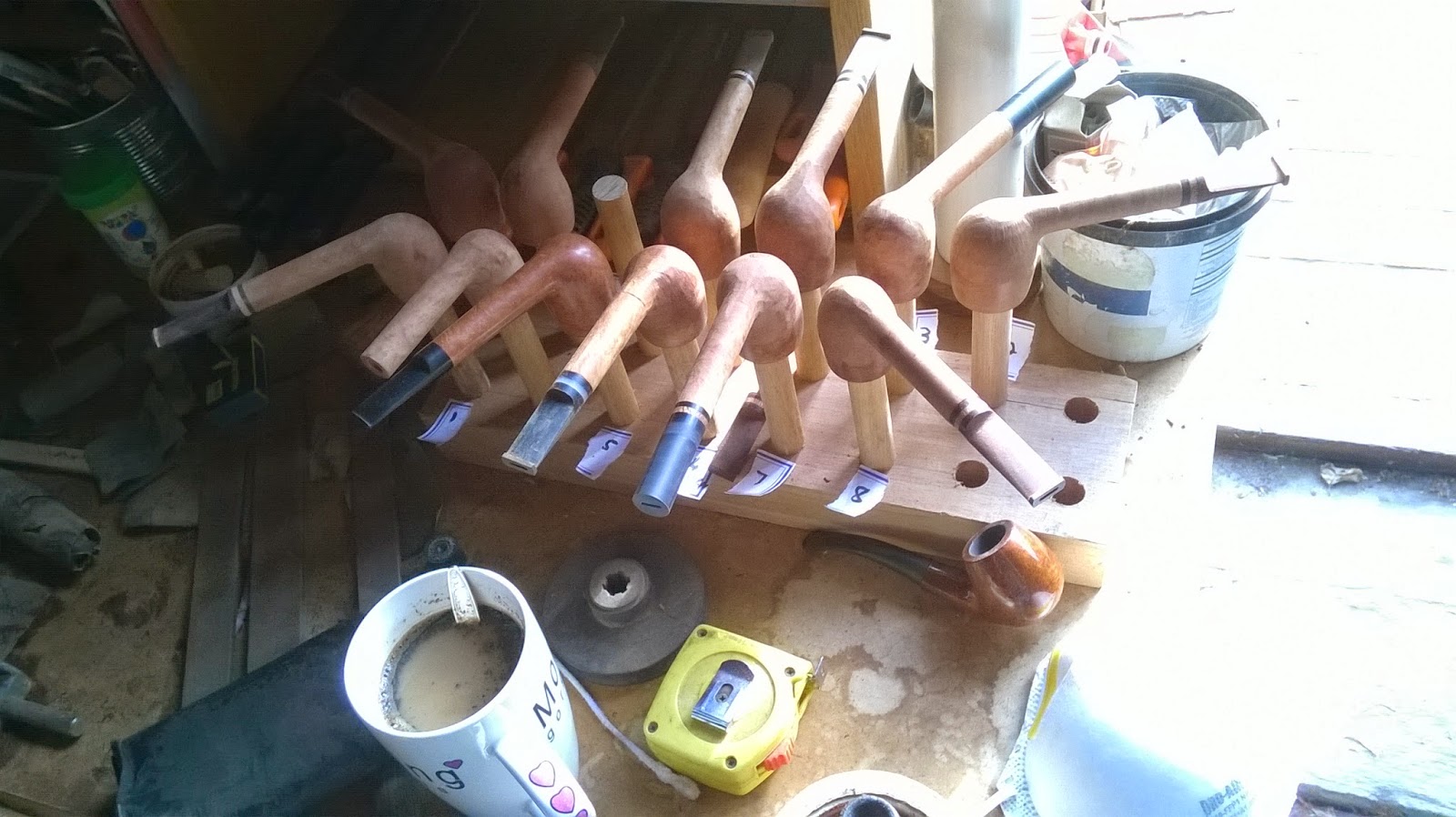 Here, I've started with fitting stems and shaping them. Oh, and in the foreground a prerequisite for pipemaking: coffee! 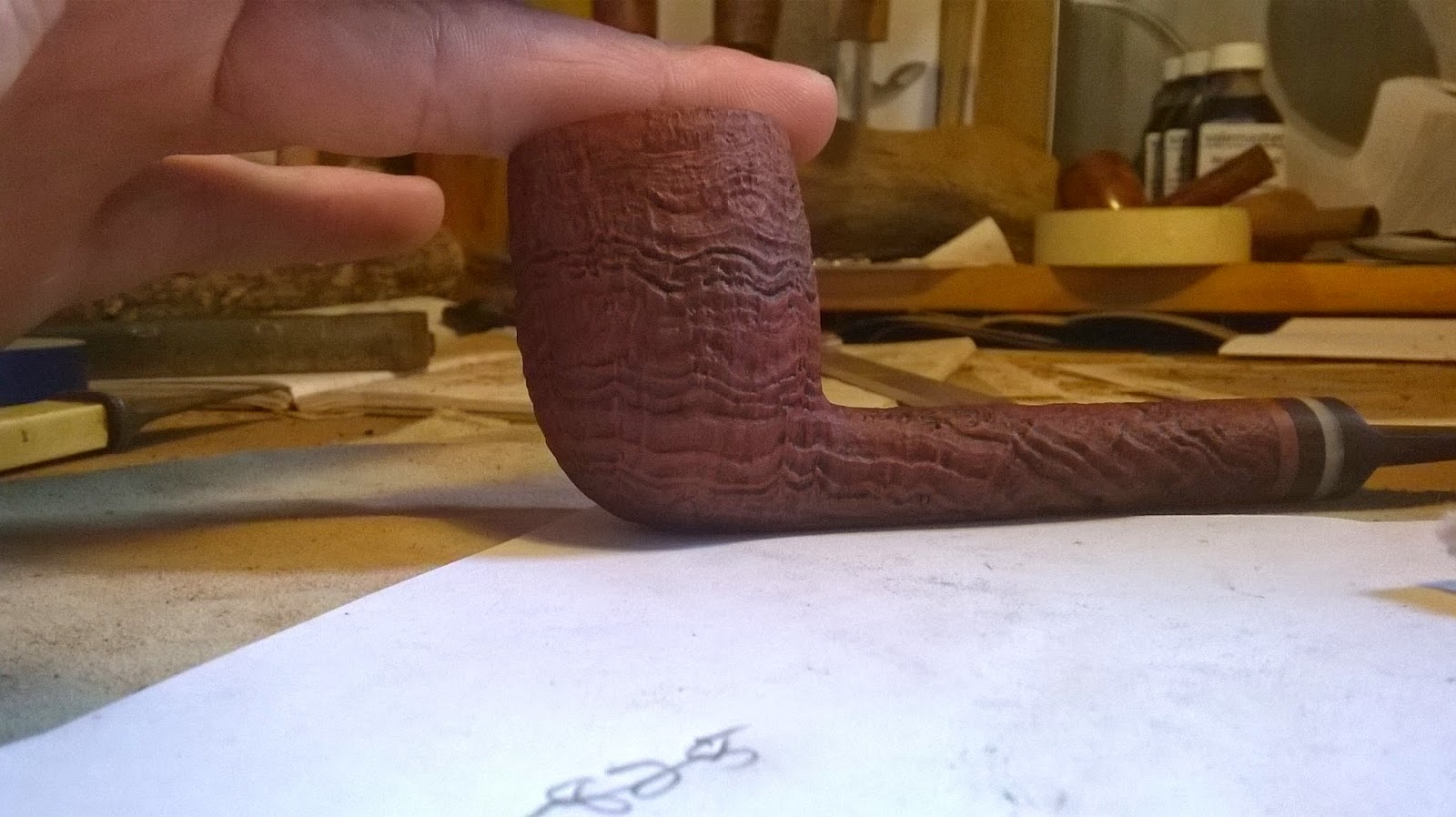 This blast gave me a big surprise. The wood was overall unremarkable, with enough flaws to ensure a blast. Just goes to show that however and whatever you think you see on the outside of a stummel or block of briar, is, well, just a wild guess! And boy was I wrong with this one! 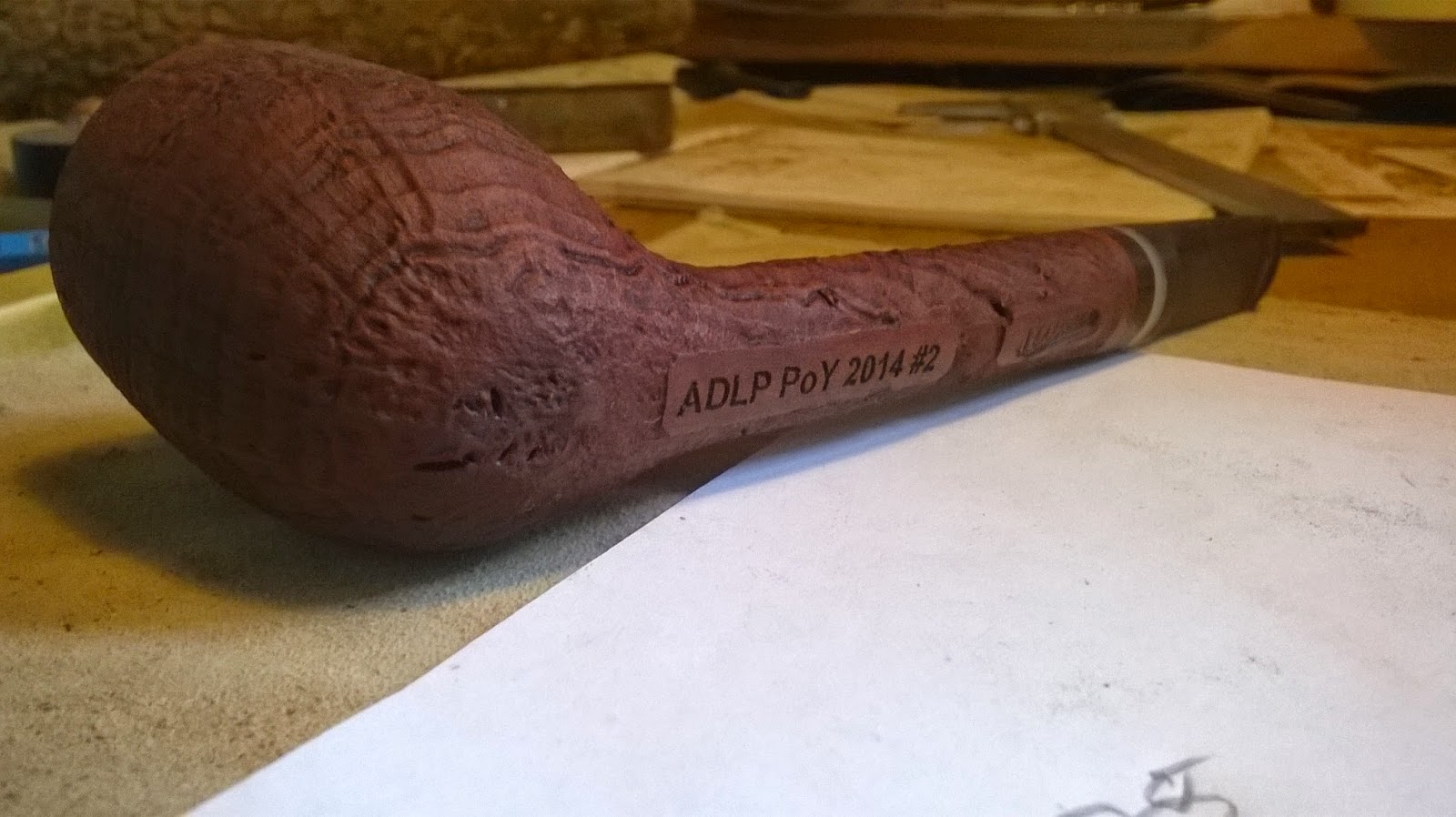 The same pipe with ADLP PoY 2014 that was laser engraved on it, as were the rest. 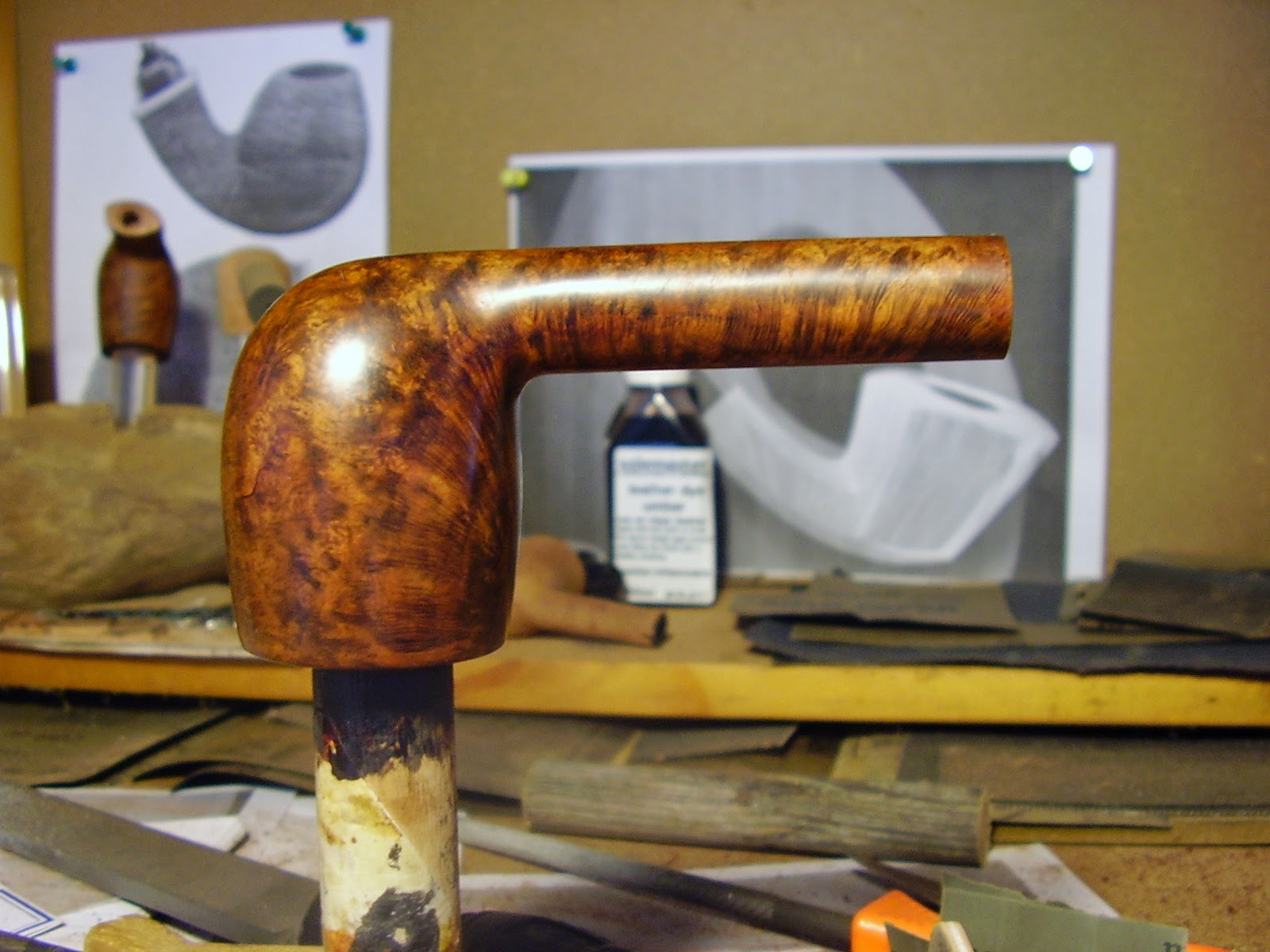 This pipe received some contrast staining that came out pretty decent. All the pipes were made from over 50 year old Algerian blocks and in those days, most cuts of briar were just to maximise quantity, most definitely not quality of grain. Hence most blocks had very irregular grain. 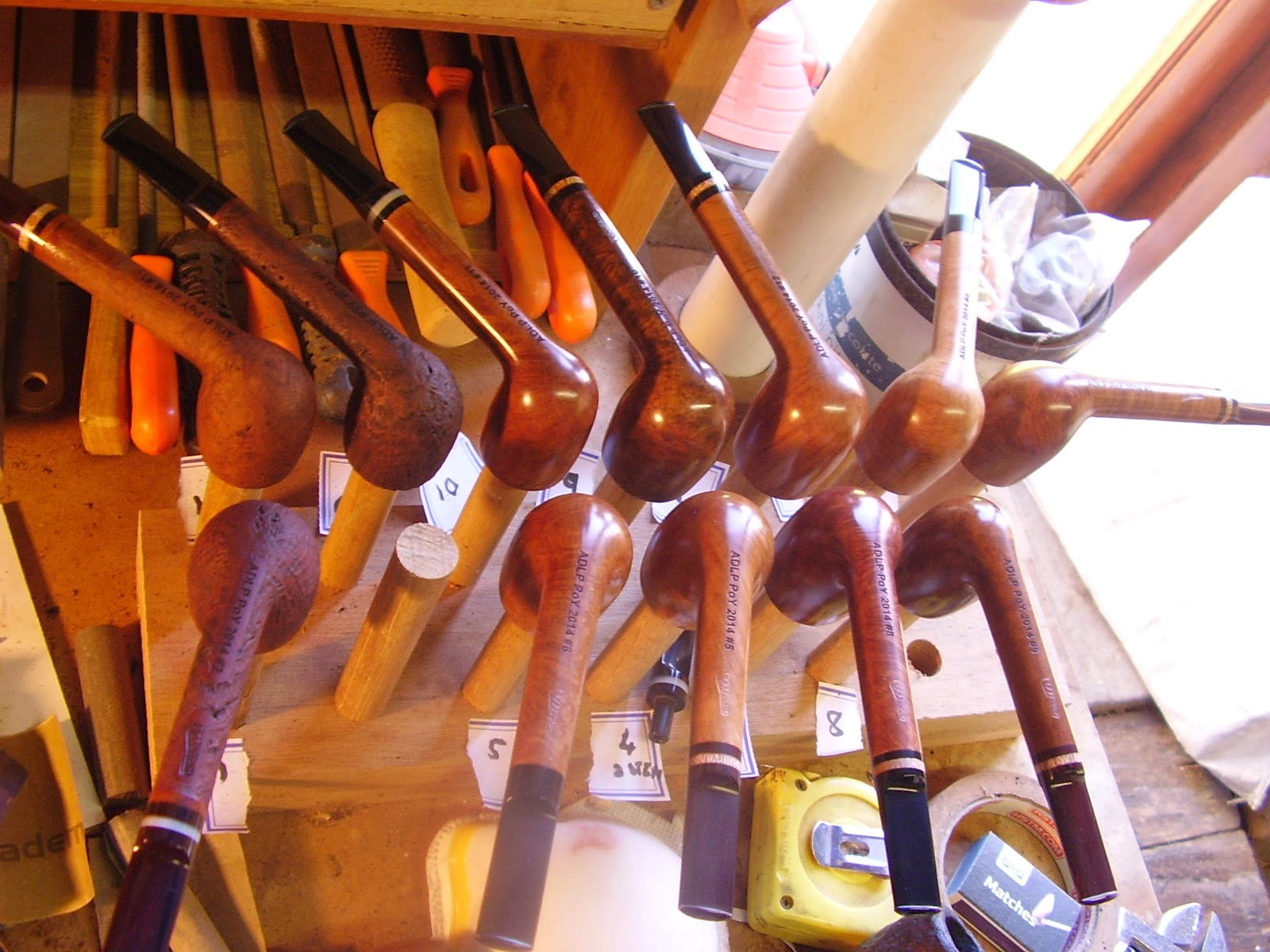 Getting closer to completion... 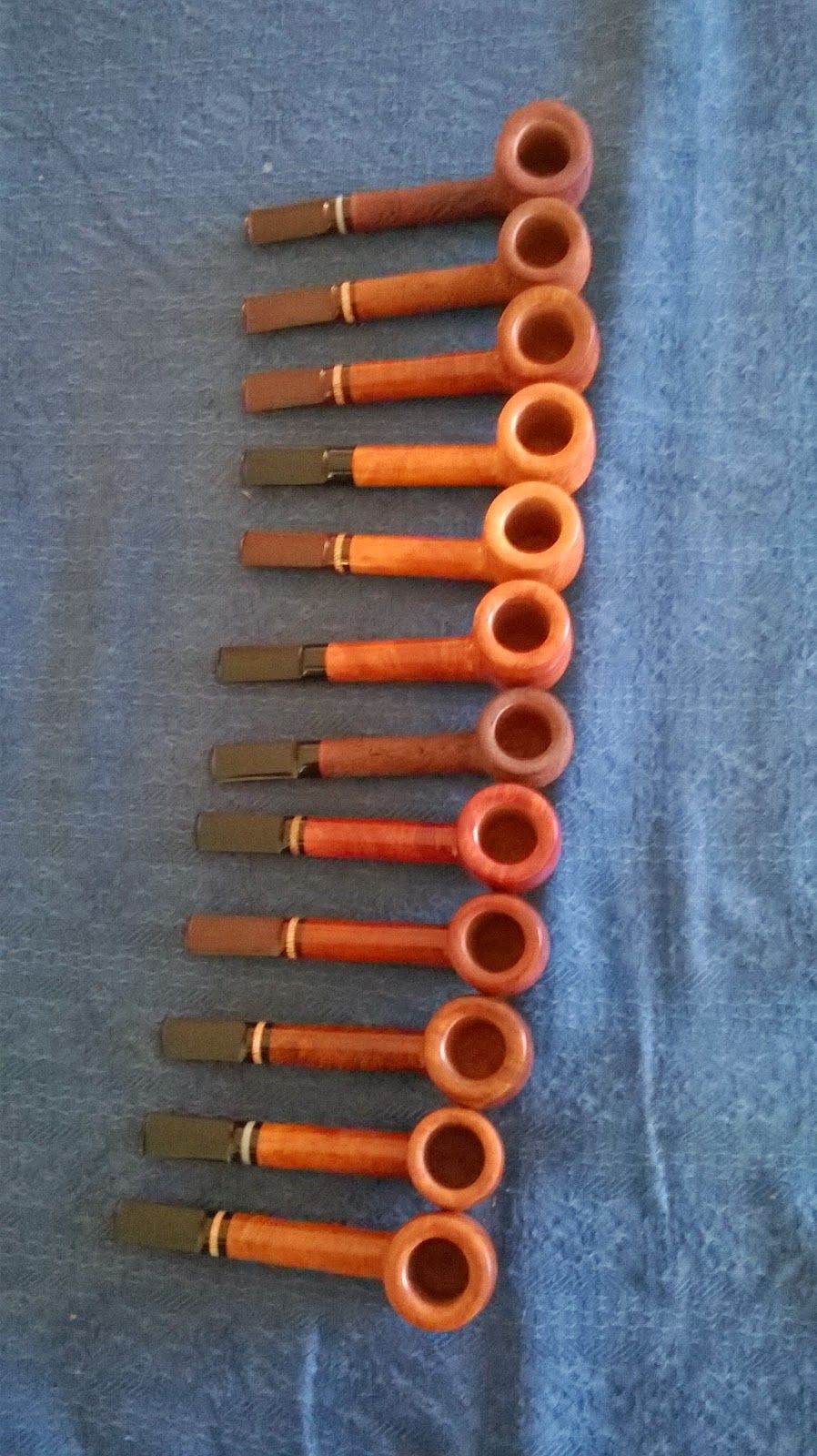 A view from the top of the completed lot. 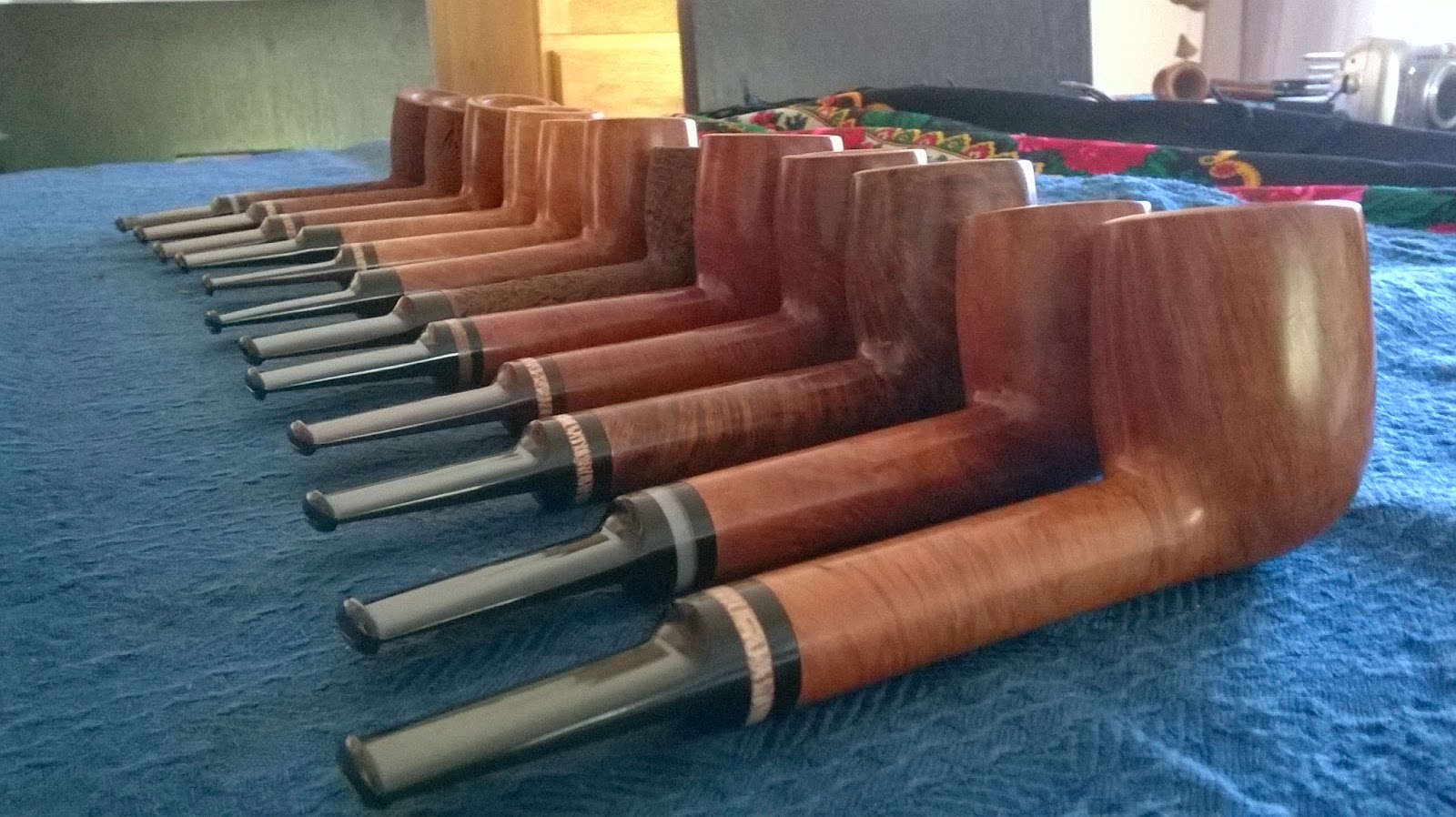 And a sideview, just before boxing and a trip to the Post Office.

Tonight I have this one on the bench. In the pipemaking world nowadays, anything with a panel on the side and some kind of sharp edge somewhere, is called a blowfish. Most of them done with cross cut ebauchons. Personally, the real blowfish is similar to what I've tried here. Plateaux, straight grain and an edge from the top of the bowl straight through to the stem, emphasising the difference between the straight grain on the side and birdseye on the bottom. 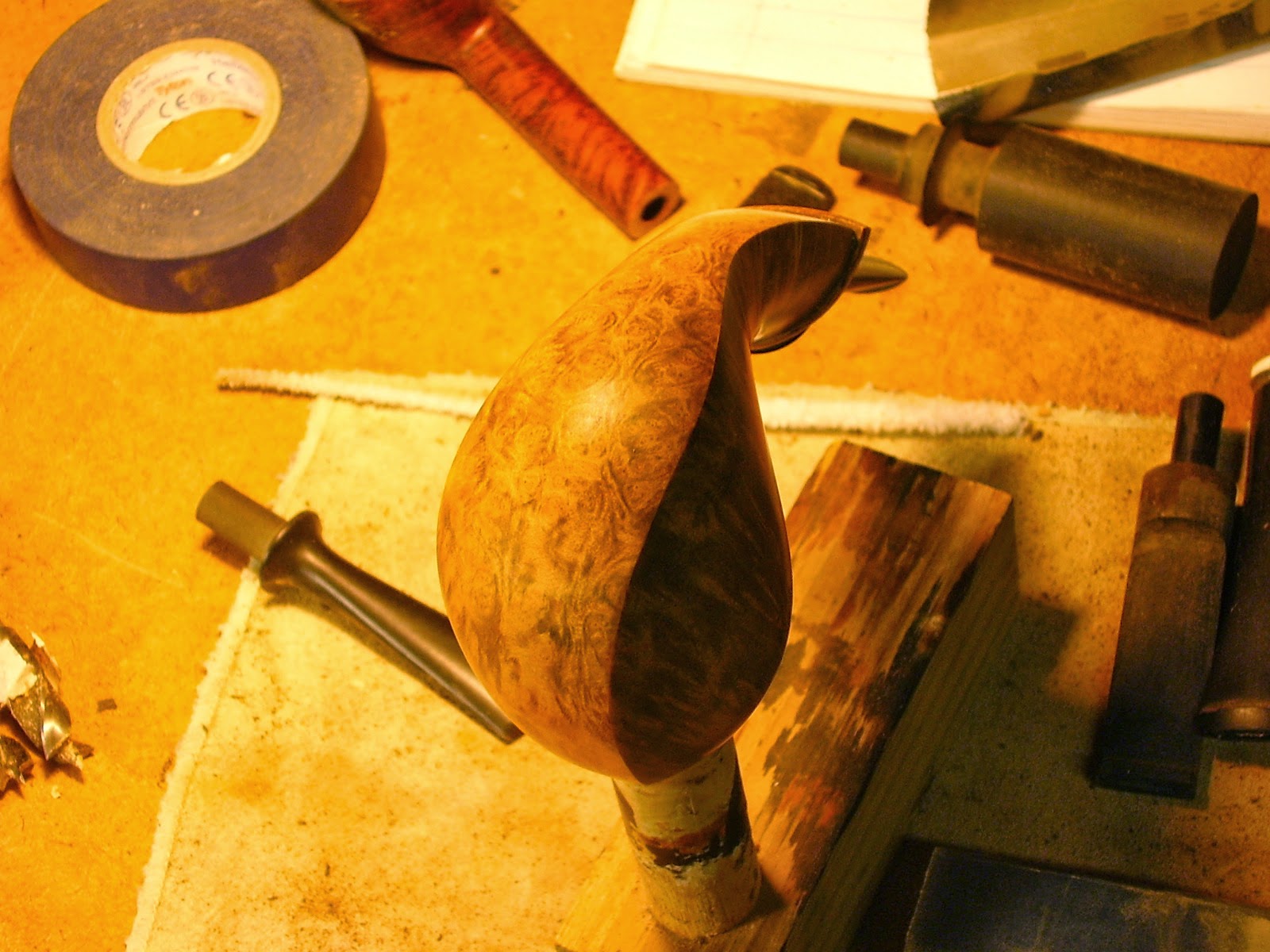 This is my attempt. If you want to have a look at the finished pipe, it should be on my website in the coming week.
Posted by charl goussard at 11:01 PM No comments:

Here are a couple of pipes that I'm busy with at the moment. 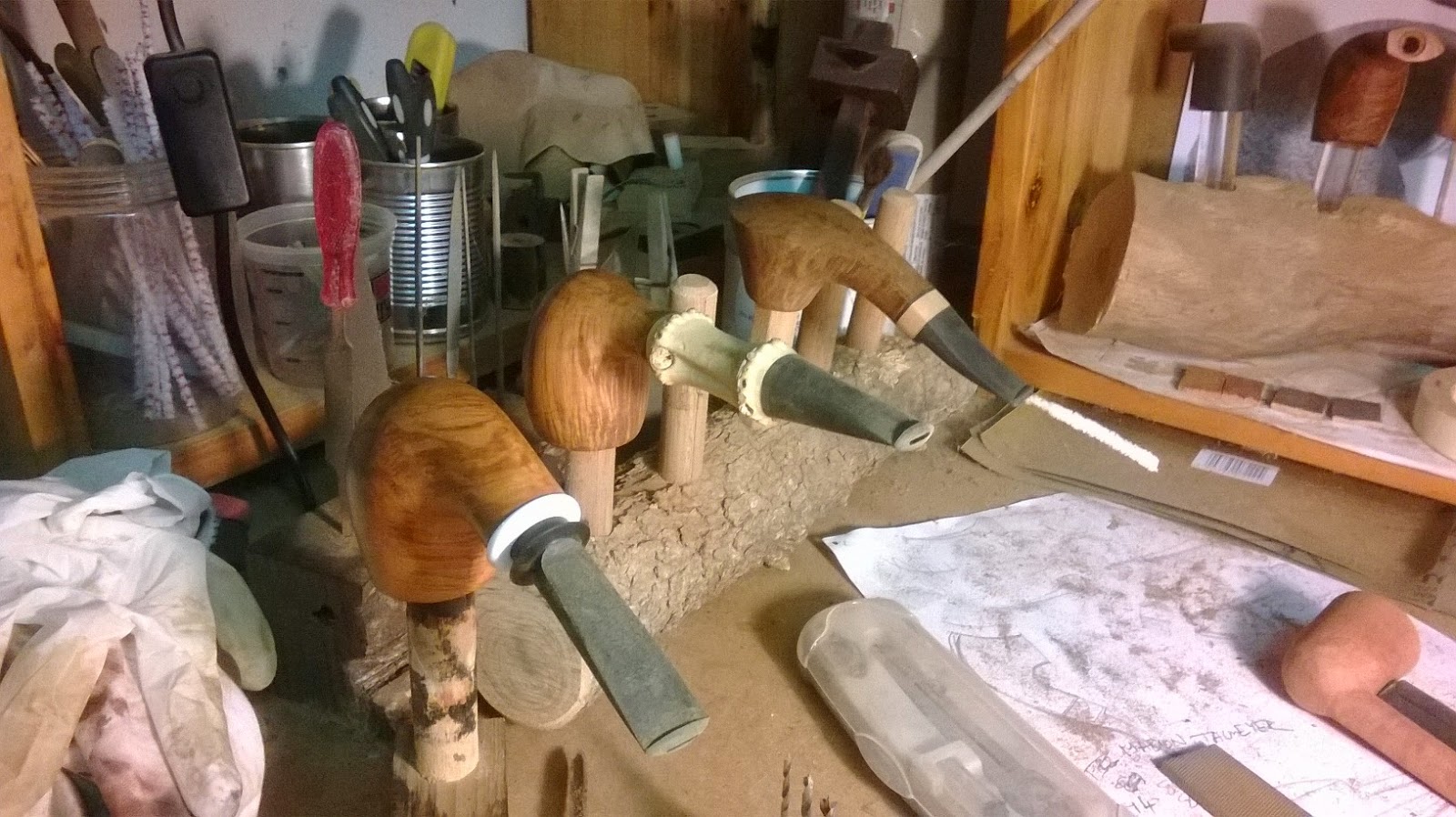 At the back is a little chocolate volcano with a wild olive stem ring. A little pocket rocket!
The pipe in the middle is an acorn bamboo with really gorgeous grain. The growth rings are absolutely stunning, making me really tempted to blast. But not a single little pinprick flaw shows on this one. It is really big though, so it is not going to work for clenchers.
The one in the front is a stumpy chubby bent from cross cut ebauchon. This is my type of pipe. It is short enough to fit into a pocket, with a big enough bowl to last me quite a while.
All  three should be on the website in a couple of days, if you want to see some finished photos.
Posted by charl goussard at 7:54 AM 1 comment:

Somebody is still thinking about pipesmokers

I saw this while visiting Lithuania in January. Pretty cool!

Posted by charl goussard at 9:31 AM No comments:

A coming of age

In my first year at varsity, my room mate smoked. I did not. In fact, I hated the smell of smoke. There was a constant moaning and groaning from my side regarding his smoking in the room.
One afternoon, we were chatting along, when I told him that I will never smoke cigarettes (ha!), because it stinks. The only smoking I might do, I declared, might be a pipe, because it least that smells nice!
So off my enterprising friend Andreas went and he got himself a pipe, thinking that he will then be able to smoke in the room without any complaints. It wasn't long before I tried a couple of puffs and the infatuation started! 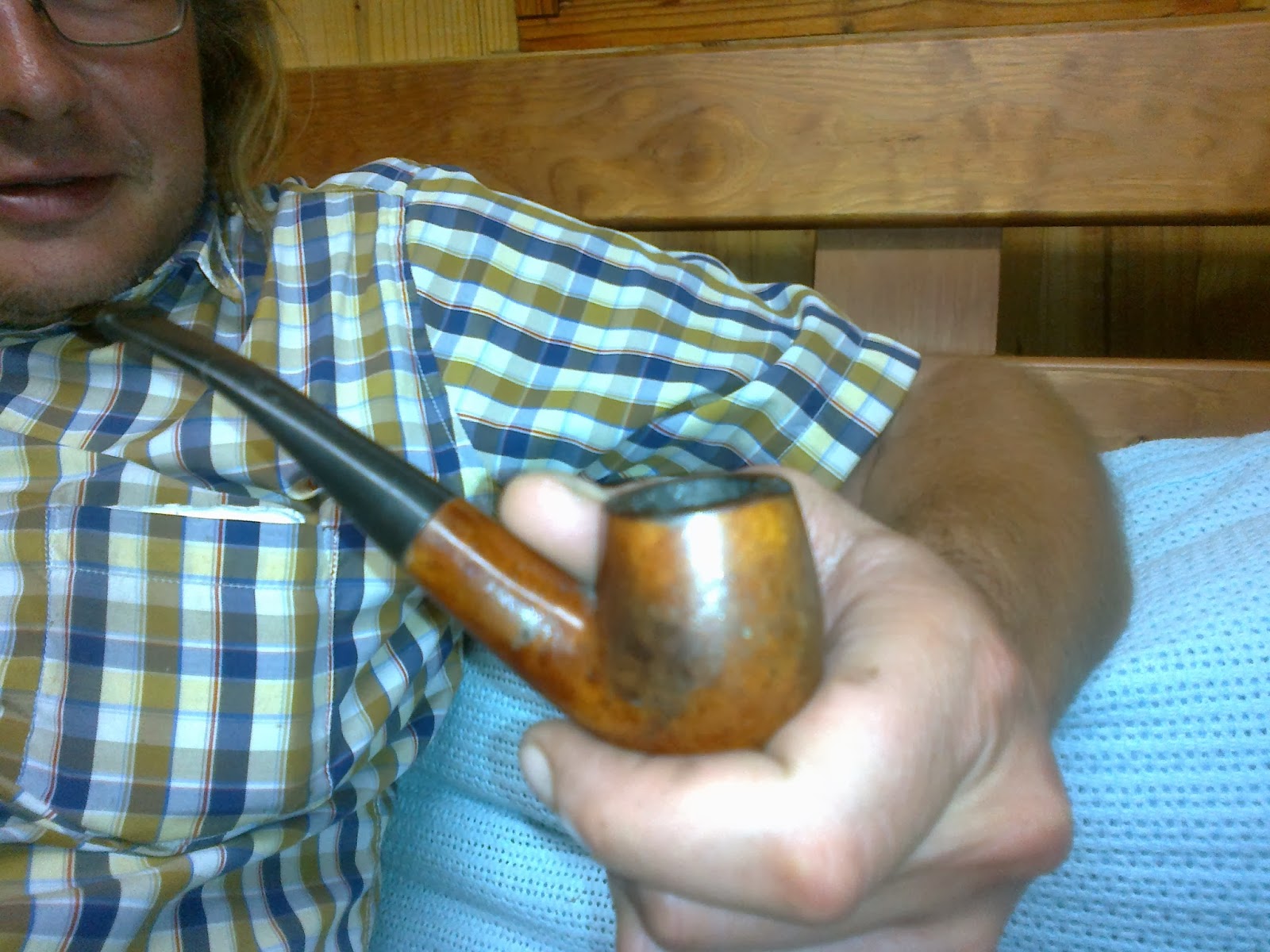 My dear friend came visiting over the weekend and much too my surprise, he pulled The Pipe out! The very first one that he bought and we both smoked.
It is a no name basket pipe, of course stamped "real briar" (and that only) with crackled and pitted varnish finish. The bowl looks like crap, the tenon have paper turned around it to keep it in the mortise and the stem has been superglued where it broke in two.
Does it have any monetary value? No way! But that little crappy pipe is worth much more to me than my whole collection, I'll give 10 Goussard Pipes for that pipe to keep ownership of either me or my friend.
And the best of all?
It was exactly 21 years ago we met and started smoking that pipe together, we're still doing it and we probably will be doing it still in another 21 years time!
Posted by charl goussard at 10:28 PM No comments: